Atmosphere of the restaurant: This was an after work trip to this restaurant, so I arrived no later than 5:30PM. The bar was not full, but the patrons at the bar were clearly fans of the bar (old or new). A group of ladies were taking pictures of the bartender as he worked and of the bar, and so was I (my excuse is I’m a blogger). Every server, bartender, and guest was friendly. It reminds me of a local Mom and Pop store where, as corny as it may sound, ‘everybody knows your name’. I haven’t been to a place like that in a long time that was modern with all the fun foods and drinks, but yet had the touch of a classic joint that actually took the time to chat up every guest and enjoy their company. I felt like I even made friends with the people around me.

Service: Right in line with the homey feel of the atmosphere, the service was great! Our bartender for the evening was Ben, and he had the best personality. He did tend to the bar, but also made great conversation as he walked back and forth prepping the fresh ingredients (pictured on the left)

or creating cocktails for the servers’ tables. A major thing I look for when going to any bar is that the bartender is not only knowledgable about the drinks, but is willing to take the time to get to know your preferred tastes and will make recommendations specific to your desires. Ben did just that. He asked me what liquor was my favorite before he recommended a drink. I told him my number 1 favorite liquor of all time is Tequila. I will quote what I told him for the taste I was going for, “I like a yummy drink that will knock you on your ass.” His response and the chiming response of one of the servers was, “Then you want the El Panzon.” That was really my experience with the service…they all worked really well with each other, and all were interested in what I may have wanted and each made suggestions to me. It wasn’t the kind of place where everyone only tends to their section and that’s it.

Eats: I’m a full supporter of the “don’t drink on an empty stomach” advice, because when I eat food while drinking, I drink slower, and my food absorbs some of that delicious alcohol. I initially ordered the deviled eggs “snack” which had a candied bacon topping. It was the perfect blend of flavors. I was a bit nervous about the sweet on top of the sour/tart taste of mustard, but it was a delightful combination. For those of you who don’t know, H. Harper Station boasts a $1 oyster special during happy hour which lasts from $5-$7pM. So naturally I chose to try 4 oysters. They were small, and delicious. I was told by my bartender, Ben, that the chef was testing out a homemade tabasco sauce, which was super spicy, but didn’t burn your mouth, so, quite perfect. Lastly I had a little dessert to go with one of the drinks that I had that was a play on a White Russian, so I went with the Churros which came with a chocolate sauce. And back to my comment about feeling like the patrons were super friendly; I kept recommending drinks and eats to this dude sitting next to me so he offered me a little taste of his caramel popcorn with bacon. It reminded me of a better version of Crunch and Munch that added a much needed bacon ingredient to the mix.

Drinks: Of course I only cared about the drinks, because I was there to see if H. Harper Station’s reputation of being one of the top bars for cocktails was justified (see articles in Thirsty South, Creative Loafing, Eater: Atlanta). Ben the bartender is awesome (I would specifically ask for him every time if I could), and I’m not saying that because he gave me shots or drinks for free, because that wasn’t the case (ok, I did get to taste the drink The Dude for free, but only because my churros took a long time to come out for some reason). I would recommend him based on what I said in the service section. 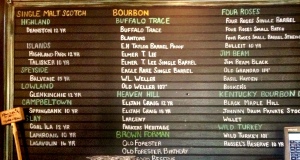 I told him my friend and I were starting a drinking blog and wanted to learn about the bars we visit, so he told me a little history about H. Harper Station opening and about how the proprietor of the bar, Jerry Slater, takes pride in his selection of alcohols for the bar. I had to take a picture of the selection to give you an idea of how much pride they take in purchasing their liquor. I may have known 5 liquors in the selection just offhand as a common brand of liquor (Bacardi, Jim Beam, Jameson, and Wild Turkey were most noticeable). All the rest looked like it had a story.

It was one of those tequila based drinks where the tequila sits on your lips and tingles a bit after every sip.

So back to the El Panzon, which is the first drink I had based on my request to have a tequila based drink (their specialty cocktail menu is organized by the main liquor). It was one of those tequila based drinks where the tequila sits on your lips and tingles a bit after every sip. The tequila taste is dominant, but not in an overbearing way where you’re afraid to inhale the drink because the tequila smell makes you gag as you flashback to a night you took too many shots of crappy tequila. The subtle taste of fruit knocks a bit of that tequila taste down a notch and blends nicely. I wasn’t particularly a fan of the pepper salt, and honestly, I never like salt with margaritas anyway so unless I’m tossing back a shot of tequila I can do without salt of any kind on my rim. This was a damn fantastic cocktail that both men and women alike will enjoy.

When I go to a bar, I like when they not only take pride in the presentation of the drinks, but also in the naming convention of the drinks. Ben admitted that Jerry Slater names all of them so go Jerry. Some of my favorites were the Root Down which paid homage to the Beastie Boys founding member Adam “MCA” Yauch who passed away in 2012, the Drop the Beet clearly was named because of one of its key ingredients, the beet shrub, and lastly The Dude which I specifically liked because I like the word dude. As I stated, Ben gave me a little sneak peek taste of The Dude because my churros took like 20 minutes to make. It looked like a White Russian, but it tasted just like Prailines and Cream ice cream. I can’t even lie, that drink made me completely forget about the fact that I’d been waiting a long time for my churros, because that ice cream taste with churros dipped in chocolate sauce was orgasmic.   Stay tuned for Designated Drinker’s review of the “Bufala Negra” cocktail that H. Harper Station offers.